Ever thought of cooking with Jerusalem artichokes? Guest author Margaret Paton — freelance writer, teacher and organic gardener — discusses the taste sensation of chips made from this relative of the sunflower and how easy and healthy it is to cook yourself up a batch.

Jerusalem Artichokes (JA for short, Helianthus tuberosis) are the poor cousin of potato chips, but have so much more to offer (and they keep giving, you could say, ahem). JAs also go by the name of sunroot, sunchoke or earth apple and are in the sunflower family hailing from eastern North America.

Thinly sliced and pan or deep fried they are crunchy, have a lovely chewy caramelised edge, sometimes are soft and that’s the culinary experience in a single chip!

Imagine having a year-round store of JAs in your garden, so any time the pang hits for these chips, you just dig up these knobbly tubers, clean, cut and fry? From dig to munch is less than half an hour! Note there is a slight after effect. More about that later.

What you need:
About 1kg of freshly harvested JA tubers
Oil for frying (your choice – deep or pan fry)
Salt to taste
Asafoetida (to reduce the flatulence after effects if that worries you)
Paper towel for draining

Method: Dunk the tubers in a kitchen sink full of water. With a brush remove the dirt, but if it’s trapped in between hard-to-reach places, chop that bit off to release the dirt. Lightly rub them dry with a tea towel. No need to peel them. Use a mandolin to slice them uniformly to your preference – about 2mm to 5mm works well. Have hot oil in a fry pan ready – if it sizzles when you pop a piece in, it’s ready to go. Slowly pop a handful of the sliced JAs into the oil and gently stir about every minute so they cook evenly. They can take less than five minutes to reach golden brown (darker at the edges). They may look a bit soft and sludgy in the oil at this stage, but once you lift them out onto kitchen paper to drain, they soon crisp up. Sprinkle with salt to taste, and/or Asafoetida. These chips stay crisp even if left out overnight, but there’s little chance you’ll have any left the next day – too scrumptious!

And the after-effect is the flatulence. More about that below.

By the way, Jerusalem Artichokes aren’t artichokes and have no connection to Jerusalem. According to Wikipedia, JAs have about 2 percent protein, no oil nor starch. They contain a whopping 76 percent carbohydrate inulin, which converts into its component fructose when stored for any length of time. This gives them their sweet taste, about one and a half times more than sucrose. The downside is your digestion can’t break down the inulin, but your colon bacteria metabolises this. Yes, that’s what causes flatulence and sometimes tummy pain. That’s why the Asafoetida is your best insurance. 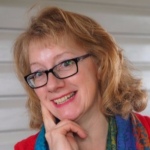